Solar pool ionizers can provide a low-cost and environmentally friendly way of keeping your pool crystal clear during the summer months. Solar ionizers use the sun’s energy to pass a weak electrical current through a copper bar, killing bacteria and algae in your pool water and reducing the amount of chlorine you’ll need to keep your pool clean and fresh. Though the device is simple, choosing a product from the many options available can be complicated. We’ve combed through the available alternatives and consolidated the information so that you can find the solar ionizer that’s right for you. Read on for several brief reviews of the top products on today’s marketplace, as well as several choice pieces of advice on selecting an ionizer for your pool from the wide variety of possible features and options. 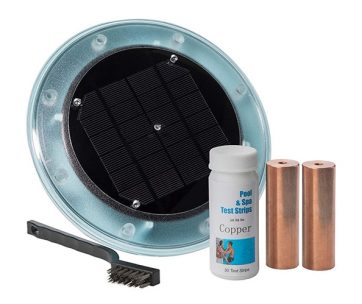 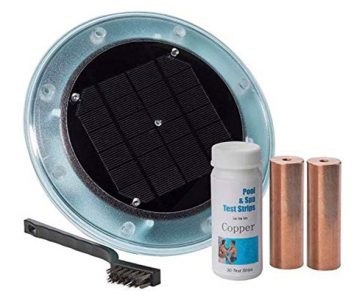 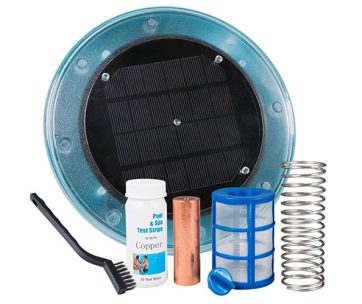 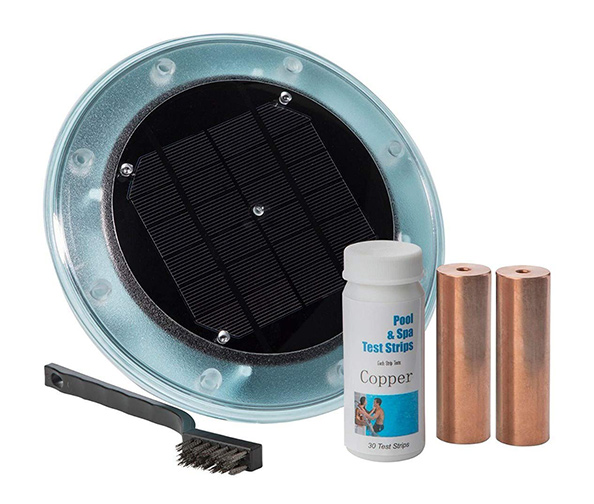 Our top pick among the many products on the market, DR Global’s Solar Pool Ionizer provides all of the perks of a durable solar powered pool cleaner at a reasonable price. Like all solar ionizers for swimming pools, DR’s Global’s product utilizes the sun’s rays to generate a weak electric current, turning a copper rod and coil into an ionizing agent that prevents the growth of bacteria and algae in pool water. The product works in both salt water and chlorine pools, dramatically reduces the number of chemicals necessary to keep a pool clear, and works with pools up to 35,000 gallons. As an added perk, DR Global offers a 30-day money back guarantee. Combined with this product’s reasonable price and proven reliability, this ionizer is an obvious choice for our editor’s recommendation. 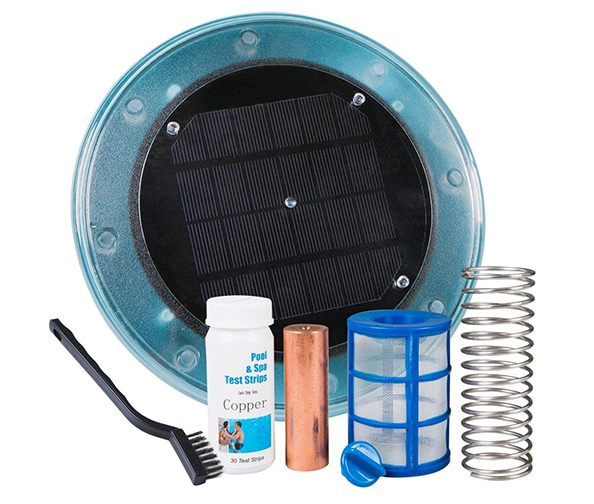 Available at almost a third of the cost of top-of-the-line models, Xtremepower provides much of the same power at an admirably low cost. Equipped with the standard features of its competitors, the Xtremepower has a plastic shielded solar cell, a copper ionizing coil that must be replaced every 1 to 2 seasons, a copper core, a filtration basket, a cleaning brush and a filtration capacity of 32,000 gallons. Based on the reviews, the product is also extremely reliable, especially given the low price, making the Xtremepower an obvious pick for best value. 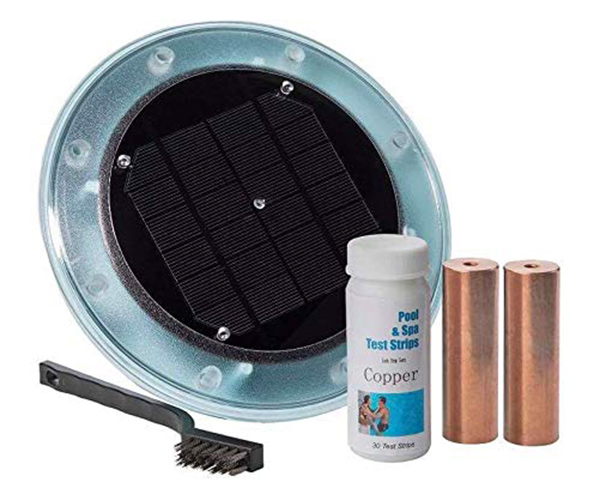 One of the most popular options available on today’s marketplace, Tradeitz’s pool ionizer stands out mainly for it’s perfect standardization. Equipped with all the features touted by the competition, including a plastic-protected solar cell, a cleansing capacity of up to 35,000 gallons, and a durable copper anode, the Tradeitz also comes with a 30-day money-back guarantee–an offer worth noting if you’re unsure whether or not a pool ionizer is right for you. Relying on the offer of a refund can allow you to test the waters (pun intended) in a low-stakes way as you decide whether or not to keep your new solar pool cleaner in play. Consequently, if you have reservations about the effectiveness of this technology compared to more traditional chlorination or saltwater filtration, the Tradeitz is a great option to consider. 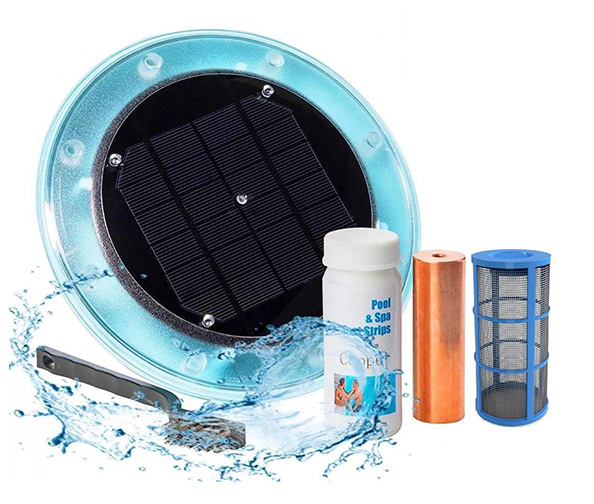 Though there’s no way of knowing whether or not No More Green’s model is indeed the original solar pool ionizer, we do know that this product is mid-range in terms of price, but plays with the big boys when it comes to quality. With a thick covering protecting the unit’s solar cell, the ionizing unit is long-lasting and effective for pools up to 35,000 gallons. Plus, if you register your purchase with No More Green’s website within thirty days, you qualify for coverage under the product’s unmatched lifetime warranty. Other features of the unit are on par with the competition; like most alternatives, for example, the Original Pool Ionizer’s copper anode must be replaced, on average, once every two years. Overall, this is a solid option for those looking for a reliable ionizer at a reasonable prize. 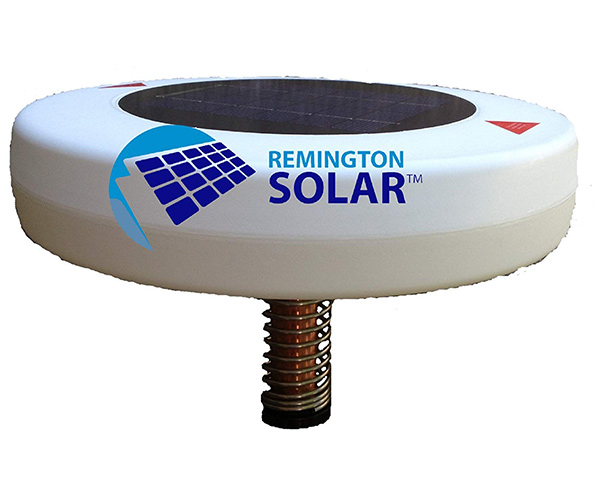 Slightly more expensive than the competition, the Remington offers some amenities to justify the increased price. While the device is certainly a step up in terms of quality, that durability is not matched by increased effectiveness. Like most solar ionizers, the copper electrode depletes after one to three seasons, and must be replaced on a regular basis. The biggest upside to the price of the Remington product is the 30-day no-risk trial period that comes included with every purchase. Additionally, the effectiveness of the Remington puts a major dent in the amount of chemicals necessary to keep a pool clean and clear. Consequently, if you’re looking to dramatically reduce the amount of money you spend on pool cleaning chemicals and are willing to make a big investment upfront in order to do it, this might be the best option for you.

Although not quite as stylish as the competition, this solar pool ionizer holds up very well in terms of reliability and customer reviews. The product comes with the no-nonsense base unit and the essential accessories: an anode, a cleaning brush, a debris basket, and copper testing strips. Additionally, while the Pool Ecologix solar pool ionizer works for both chlorine and saltwater pools, it is only effective for a water volume up to 25,000 gallons, regardless of salinity. Any more water and you’ll need to purchase an additional unit to get the job done. Thought the Pool Ecologix has its drawbacks, at $120 the price may be right for the buyer looking to use the sun’s energy to sanitize their pool on a budget.

Like most solar powered pool heaters, the ionizer relies on solar cell technology. The small solar cell and associated battery relies on a phenomenon known as the photovoltaic effect–the creation of voltage and an electrical current upon exposure to light–to harness the sun’s energy, store it away, and access it later in order to power the skimmer’s motors and sensors. The solar cell–the dark panel at the top of a solar pool light–harnesses the energy of the sun’s rays and converts it into direct electric current. This works because the solar cell is made of layers of silicone and specific chemicals that create electrical potential (a.k.a. voltage) via alternating pockets of positively charged space and negatively charged, reactive electrons. When high energy waves of light cast by the sun strike these electrons, they are discharged from their positions and pushed into the cell’s positively charged spaces, ultimately creating an electrical current.

Much like dominos, the initial movement of electrons down the electrical gradient triggers a chain reaction–electrons transfer their energy to one another on down the line. The solar cells channels this induced current through wires connected to a battery, which stores the gathered energy in the form of yet another potential difference. When the direct current generated by this battery passes through the ionizer’s alloy core, the process of ionization–the gain or loss of electrons from metal atoms, engendering them with a negative or positive charge–is initiated. These charged metal ions are then drawn from the core because of the polarity–or charge–of the surrounding water molecules. As copper is an algaestat–a material that inhibits the growth of algae–and silver is a bactericide–a material that kills bacteria–the dissolution of these ions into the pool water prevents all sorts of microscopic creatures from taking up residence in your pool. (These products are great complements to solar pool skimmers.)

Like solar pool covers, pool cover reels, and solar fountains, a solar pool ionizer can be a solid investment for those looking to cut down on the costs and harsh side effects of more traditional pool chemicals. Additionally, solar ionizers are self-sufficient and environmentally friendly–a refreshing change from more traditional pool maintenance strategies. Using the power of the sun’s rays, a perfectly safe electric current, and the natural properties of copper and silver, this technology provides many months of no-worry pool maintenance, along with the minimal upkeep of replacing the mineral core every couple of seasons. It’s similar to a solar pond aerator, insofar as it keeps your water crystal-clear. With a wide variety of reliable, high quality options on the market, you can be sure to select the solar ionizer that best suits both your requirements and your budget.